7. Logging in and getting around with Linux¶

Now that we have a Linux system installed, we can login and start using it. If you have installed a Linux system without a GUI, you will be greeted by the ‘login’ program, running on a text-console. This will look somewhat like the following:

If you specify an incorrect password, or if the useraccount you are trying to use doesn’t actually exist, the system will only tell you Login incorrect, and present you with a new login: prompt. This is done so the system doesn’t leak information about available accounts. 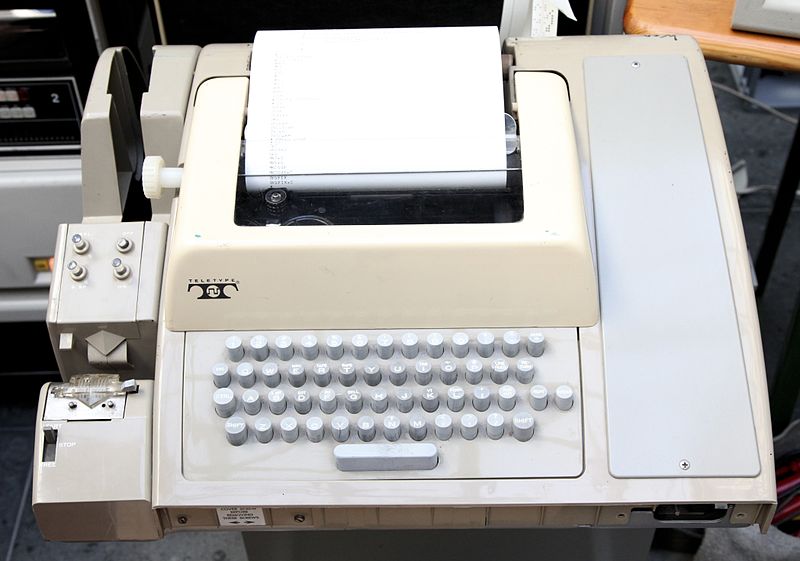 The virtual teletype is basically the software equivalent of the original hardware-based teletypes, consisting of a keyboard and a printer. Typed text would be sent to the computer, output from the computer would be printed out on either a paper-tape or on fan-folded paper. These devices were in use before monitors were commonly available, and were usually connected via a Serial interface. The linux consoles, virtual teletypes and serial-connections still emulate and work as if they were connected to a teletype, but now with input coming from your keyboard, and output going to a monitor or screen instead of paper.

If you see the login prompt (or a shell session) on a linux console session, you are in fact looking at the console or (virtual) teletype (abbreviated as tty). Most linux systems will expose multiple virtual teletypes for the user to work with. If you run the tty command, it will tell you on which virtual teletype you are currently connected. You can switch to a different tty by pressing Alt-Left or Alt-Right, or Alt-F1 through Alt-F7. Alternatively, the chvt command can be used to switch to a the named tty:

Possible uses of multiple tty’s include for example viewing a logfile on a tty, while editing a configuration file for a service on a second tty, and issueing restart commands on a third tty. Using this method it’s easy to quickly switch between different tasks, even if these are running under different useraccounts. If running with a graphical interface, this is usually not needed, as multiple terminal emulator windows can be opened and viewed next to eachother.

For most system-administration tasks you will need to have root privileges. It’s considered best-practice however to limit usage of the root account as much as possible. To reconsile these two statements, it’s best to always login as yourself, and gain administrative privileges only when needed. You can for example use the sudo -s command to start a new shell as root, if you have sudo-permissions. Alternatively you can run single commands in the context of the root user by pre-pending the command with sudo, for example: 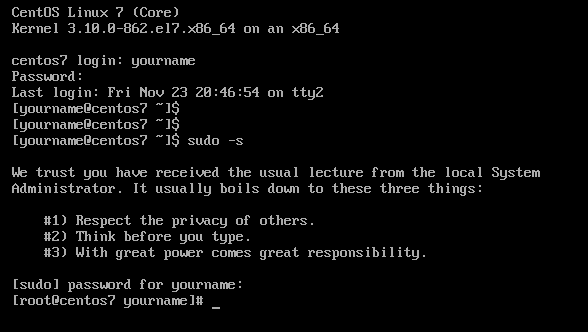 As you can see, after running the sudo -s command, the prompt has changed from

The prompt will always show you some critical information about who you are, where you are in the filesystem and if you are root or not.

The first part of the prompt is your current username, in the example here yourname. Then, after the @ sign, is the hostname of the system you are currently logged in on. Since Linux systems are usually connected to over a network, and it’s easy to hop from one system to another, it’s really important to always have a visual indication on what system you currently are, to prevent you from doing something on the wrong system. The third bit of the prompt, here ~ initially and yourname after the sudo command, tells you where you are in the filesystem. By default CentOS and RHEL put the name of the current directory in the prompt. Some other systems put the entire path here, which will result in a longer prompt if you are deep in a directory structure.

The last part of the prompt will usually be a ‘$’ or ‘#’ sign. Normal users will have a ‘$’ sign, and the root-user will always have the ‘#’ sign. In future examples, prompts will usually start with either an ‘$’ or an ‘#’ sign to indicate that the command should be run as regular user or as root.

When using Linux as a systems administrator you will be mostly working in the shell. The default shell used by most Linux distributions is bash, though other shells are available, other popular choices are for example zsh and fish. These shells are all focussed on interactive use, but there are also shells more focussed on usage in scripts, such ash dash or ash, which you can find in use on various Debian based scripts.

The shell is the main command interpreter that is started after logging in to a system. It’s job is to read commands from the user, execute the commands either in the foreground or the background and then wait for a new command to be executed. The shell uses various environment variables which can influence what the shell does, or how it interprets the commands it’s given.

The commands a shell interprets can be deviced in the following categories:

An alias is basically a shortcut command, where the typed command is replaced by some other command which will be executed. This can for example be used to add specific options to existing commands, or to define a short command which executes something which would require typing a long and complex command.

Aliases for the root user on CentOS and RHEL

On these systems, the root user has a few default aliases, which replace the rm, mv and cp commands with aliases that include the -i option. This causes these commands to ask for confirmation before executing their respective tasks.

This is done to help protect beginners from accidentally changing files on their system. When you are more comfortable in working with the shell it’s suggested to remove these aliases.

On CentOS and RHEL systems various aliases are present in the default configuration, these can be inspected by typing the command alias. As you can see in the image above, there is an alias configured which says: alias ll=’ls -l –color=auto’.

This alias means that if you would enter the ll command, the shell would instead execute ls -l –color=auto. This also works if argument are given to the command, so running:

would result in the shell actually running:

You can define your own aliases with the alias command. These aliases will only work in the currently running shell session. To keep aliases for new shell invocations they need to be configured in your .profile or .bash.rc file.

The last group of commands are the external commands. These are basically all the other commands interpreted by the shell. External commands always refer to executable files or scripts present on the storage of the system. If the shell reads a command, it will first determine if the given command is an alias or internal-command and when this is not the case, it will search for the command on the filesystem.

The shell will not just scan the entire disk for possible commands, but will only look for locations specified in it’s PATH. The PATH variable lists the various directories which are scanned in order for matching commands. If a command is present in multiple locations in the path, the first matched version will be executed.

You can inspect your current PATH variable using the built-in echo command. Shell variables are referenced using the variable-name prefixed with the $ sign:

Alternatively, you can inspect all shell variables with either the set builtin, or the env external command.

Note that the root user has different directories in their default PATH then non-root users, and every user is free to change their path temporarily of permanently to suit their needs. If you want to run a command that can be found on more then one location on the system, or that also exists as a builtin, you can run it by explicitly specifying it’s full (or relative) path as part of the command. For example, here we first use the builtin echo command, and then the external echo command.

If we specify the –help option to the commands, we can see that they respond differently based on this input:

Any process on Linux that wants to interact with the world, will need to do this by working with files or devices. Devices are presented as special files in the /dev filesystem in Linux, so for most if not all commands, working with devices is indistinguishable from working with files.

As we have seen with all command upto this point, the output from various commands is written back to the screen, and if needed, input is usually read from the keyboard. These are devices, but for the program these devices are just like files. Every file that is read from or written to, will need to be accessed using a numbered file-handle.

These 3 default file-handles can also be accessed from the filesystem as /dev/stdin, /dev/stdout and /dev/stderr.

Using the shell we can run programs, but we can also decide what they should use and input and output. If we change these inputs or outputs from the default settings, we call I/O redirection. We can redirect input, output or stderr using the redirects in the table above.

For example, we can run a command, and redirect the output to a file

As you can see, on line 1, we run the date command without any output-redirection, so the output is sent to it’s default location, which is /dev/stdout, which results in output being written to the shell-session we are currently in. In the second command, we redirect the output to the file /tmp/currenttime and notice that there is no output back to the shell, we are just greeted with a new prompt. If we then look at the file where we redirected the ouput of the date command into, using cat /tmp/currenttime, we can see that the output was placed here.

Using output-redirection with > (or 1> or 2> and sending output to a (possibly existing) file, will cause this file to be overwritten, so if you run multiple commands after eachother, redirecting the output to the same file over and over again, only tha last added data will still be present in the file. To append to a file instead of overwriting it, we can redirect with >>.

In the example above, we see redirects for STDOUT and STDERR on line 1, and a new redirection on line 2. With the 2>&1 notation we tell the shell to redirect STDERR (2>) to the location of filehandle 1 (&1), so, send error-output to the same location we are sending the normal output, and the normal output was redirected to /tmp/find-both, so the error-output ends up in here as well. This can be verified by checking the file-sizes, the filesize of find-both is (almost) the same as the other two combined.

In the previous section we have seen I/O redirection used to send output from commands to a file, but with pipes we can take the output from a single command and hand it over as the input to the next command, in essence coupling the two commands together in a pipeline. In the example below, we send the output of the ls command to the input of the wc command. This command counts the number of characters, words and lines in it’s input, and returns these to the output:

Using pipes (|), we can connect many simple commands together to perform difficult tasks, pipes are a very strong feature and part of the UNIX philosophy. As we have not discussed many of the available commands that Linux provides, this might not be clear to you yet, but as you learn to use the various text-processing commands Linux has to offer, you can start building more advanced pipelines.

As the example above shows, 4 commands that are put in a single pipeline. We will look into many of these commands in future chapters.