In this chapter we will look into network configuration in Linux, as systems without network connection are very rare in this day and age. Networking in Linux consists of a few seperate parts:

These days, almost all networks you will encounter will be IP based networks, but Linux also has support for various other older and exotic networking protocols. In this book we will only be talking about IP networks, as this fits the scope for LPI and RHCSA certifications, and what you will use daily.

Looking further at networking on modern systems, we can look at wired and wireless networking, with wireless further split into cellular and WiFi-based networks. In general, Linux supports almost all network-interfaces out of the box, as network-chip manufacturers usually work with the Linux kernel community to get support for new devices built in quickly. Only very occasionally you will encounter a network-card (mostly wifi-based) that will not work under Linux out of the box.

The two commonly used network protocols currently are IPv4 and IPv6. IPv4 is the original protocol of the internet, and practically all systems will have an IPv4 address.

IPv4 addresses are presented (for human use) as 4 decimal 8-bit numbers, seperated by dots. An IPv4 address is 32-bits in total, which limits the number of unique addresses to 2^32, which is slightly over 4 billion.

Many systems will also have IPv6 addresses, as the number of available IPv4 addresses was quickly running out. IPv6 addresses are 128-bits in size, and are printed as 8 groups of 4 hexadecimal digits seperated with semicolons.

In the hexadecimal (16-numbered) counting system, we use the digits 0 through 9, and the letters ‘a’ through ‘f’. Hexadecimal is used a lot with computer-systems, as it is a short notation which can be quickly converted to binary, which would be a lot more difficult to read correctly for humans. Every hexadecimal digit can represent 16 values, which map directly to 4 binary digits.

Since these addresses are quite long, a shorter notation is also allowed, as long as this shorter notation can be converted back consitently. In this notation, leading zeros in blocks can be removed, so:

Furthermore, repeated blocks of only zero’s can be removed and replaced with 2 colons. However, this can only be done once, otherwise it wouldn’t be clear how many zeros should be inserted here. Using this method, the above address is further shortened to:

This is the format as seen from the various Linux commands.

You can configure your network using various generic commands, which you will find in any Linux distribution. This configuration will be ad-hoc and will not survive reboots, but it’s important to know how to configure a network manually. Doing manual configuration allows you to quickly try out various settings, see if networking works and prepare you for configuring permanent settings.

To configure the permanent networking-settings, various Linux distributions have their own tools and/or configuration-files, so these methods are described in the following sections.

On many newer systems these will no longer be present in the default installs, but they are still available as optional addons.

The ifconfig tool, present in most (older) Linux distributions, and also in many other Unix-like systems, has been the go-to tool for network-configuration for a long time. These days it has mostly been replaced with ip from the iproute2 package, documented below.

Just running ifconfig will show you all currently configured network-cards and their networking-configuration, traffic counters and some hardware information.

You can also modify the network-configuration by specifying the configuration as arguments to ifconfig. For example. to configure eth0 with ip-address 10.20.30.40 and netmask 255.255.255.0, you can run:

Using the route command you can inspect and make changes to the default kernel routing table.

Routes can be added or removed as well

Removal is the same, but with del instead of add

The netstat command lets you inspect various related settings, like open network connections. See the man-page of netstat for description of its many options.

IPRoute2 is the newer set of network-configuration tools available on the Linux commandline. The main command is ip, which is a very flexible command, as it allows you to configure ip-addresses, routes, arp-entries, tunnels and various other network related settings. This flexibility makes the ip command a but more complex to use though.

ip uses the concept of objects and commands, first you specify what object you want to work with, then what task you want to perform, the command, and then the options specifying what you would like to do or change on this object. The help command can be used at many places and levels to give you information about what ip expects at that point.

These days ip is preferred, since it will handle ipv4 and ipv6 configuration using the same syntax and methods. You can also abbreviate all commands and options to the shortest unique string that matches the command or option you need, so ip -4 a a 1.2.3.4/32 dev eth0 is equivalent to ip -4 address add 1.2.3.4/32 dev eth0

CentOS and RHEL have multiple methods to configure network settings, you can use * nmcli * nmtui * nm-connection-editor (Gnome GUI)

These 3 different methods, a CLI based tool (nmcli), a curses text-windows interface (nmtui) and the GUI (nm-connection-editor), all work with and from the same configuration-files, which are plain-text files stored in /etc/sysconfig/network-scripts/.

This means that it’s also possible to just change these files with your favorite text-editor or configuration-management tools.

nmcli, the network-manager command-line-interface, is the least user-friendly tool of the bunch, as using it involves lots of typing, checking help-entries and copy/pasting unique identifiers. Unless you want to do some advanced automated configuration, I suggest to stay away from this tool as much as possible, almost anything you will actually use can be done from the configuration-file, using nmtui and nm-connection-editor.

For basic network-configuration, nmtui will get the job done, though the text-user-interface might take some getting used to. You can navigate to fields using the arrow-buttons or tab and shift+tab

When staring nmtui, you have 3 options available: * Edit a connection, used to configure a device * Activate a connection, to start the configured network * Set system hostname, to change the hostname

Under Edit a connection you can choose from the available network-devices, or add a new network-device if this isn’t configured or detected yet. Normally your first network-card will be called eth0.

If you select Edit, you can configure the network-settings for the chosen device: 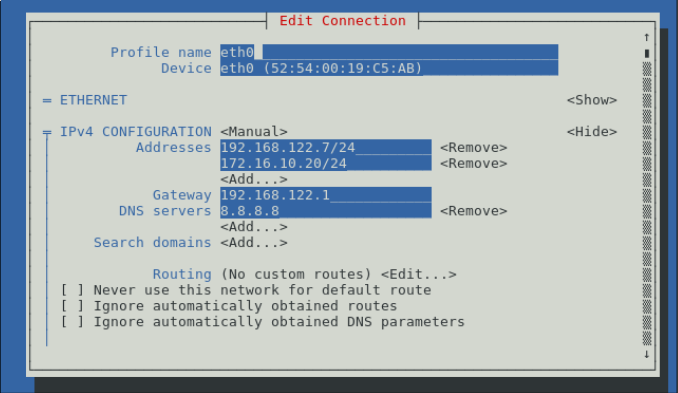 If you are on a system with the GUI installed, you can (as root) run nm-connection-editor, which will show you the following interface, from which you can configure your networking.

On debian systems, nm-cli, nm-tui and nm-connection-editor are also available, but save their configurations in various files in /etc/NetworkManager/system-connections while the normal debian-method saves configuration in /etc/network/interfaces.

As can be seen here, the configured IP-addres can be found under the IPADDR variable, and other related networking values under PREFIX and GATEWAY. The secondary (and further) addresses will have a number appended, so ADDRESS1, PREFIX1, GATEWAY1, etcetera.

In the configuration above, you can see Debian’s default network-configuration. In line 4 we see the source statement, which includes all files in /etc/network/interfaces.d/, which is a directory where you can add more configuration files for networking.

In line 8 and 11, auto <interface> means that this interface will be brought online during booting.

Line 9 configures the loopback interface, which only has the default configuration. Line 12-14 configure the ens3 interface with the specified ip-address, netmask and gateway.

The /etc/network/interfaces file supports many options and configuration-directives for various networking features, such as vlan’s, secondary ip-addresses, routes, dhcp-options and commands to be run before or after bringing up the network-interface. The interfaces(5) man-page documents all the available options.

To activate or deactivate an interface, you can run ifup <interface> or ifdown, both of which also take the -a argument, to act on all interfaces.